H is for Hampshire College, Amherst, MA.  In 1987, I transferred from community college, mostly prompted by hearing a woman in an airport in Michigan, on my way home from the Michigan Womyn’s Music Festival, telling someone that Hampshire was the only school she could imagine attending.  I went to the library, and read about Hampshire in the Peterson’s Guide(print of course), and learned I could design my own major, and there were narrative evaluations rather than letter grades.

I loved the creative concept, the interdisciplinary mash-up.  The reality was harder to love.  I was lonely.  I was a work study student in the college post office(and still remember the box numbers), and was baffled by the student who carried his books in a paper bag, but drove a Mercedes, or the students whose parents could pay the tuition in full.  I graduated with student loan debt, and a degree that looked like a mandala. There is a niche market in framing them with round mattes.

I lived in Greenwich Mod 13, which was named for one of the towns that disappeared under the the Quabbin Reservoir.  My room was pie shaped.  In honor of today being Orange Tuesday, I have included a photo of my chair, which came with the room. 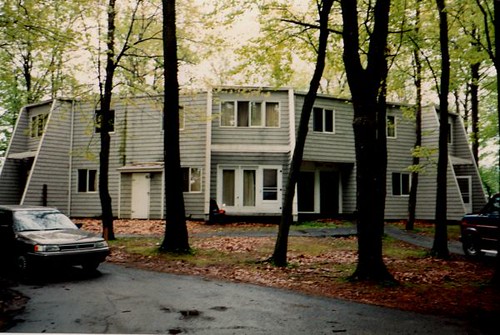 Greenwich House Donut #2, Mod 13 Hampshire College, 1990. Photograph by Margaret Almon, as she packed up her grandparents’ van with her worldly belongings.Memorable aspects of Hampshire:

More images on my A to Z Challenge 2013 Pinterest Board.