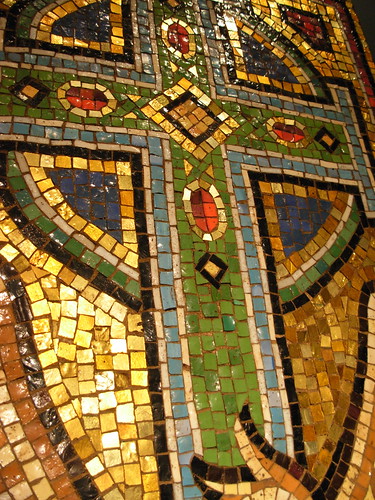 As soon as I heard about Walls Speak:  The Narrative Art of Hildreth Meiere, I knew I had to make a pilgrimage.  As I have written, Meiere’s mosaics at the Wernersville Jesuit Spiritual Center were the first mosaics to catch my eye, and set the desire in my heart to make them.  Because mosaic and murals are often part of architecture, it’s a challenge to do an exhibit in a museum.

St. Bonaventure University’s Regina Quick Center for the Arts is the host of this first major retrospective of Meiere’s work.  To develop as full a representation as is possible, the exhibit ranges from photographs of her installations at the Cathedral Basilica of St. Louis, the Prudential Building in Newark, NJ, and the Nebraska State Capitol Dome, plus sketches, a smalti sample board, and Triptychs for the Armed Services, and sample mosaics from the Cathedral Basilica of  St. Louis project.

I was fascinated by the Triptychs which were from World War II.  Meiere organized a group of artists to paint over 500 Triptychs for Catholic, Protestant and Jewish worship in the field during the war, painting 70 of them herself.  The portable altars are like a morsel of the church in the midst of destruction, and I can’t even imagine what the experience might be like to worship in a war zone.

St. Bonaventure University’s buildings is are a tile lover’s dream, with “Italian Transitional” architecture with red roof tiles, and bas relief plaques.  And Olean, NY was also home to the American Olean Tile Company, which coincidentally had a factory here in Lansdale as well.  In addition there was a sculpture of St. Francis by Beniamino Bufano at the Regina Quick Center, the artist I discovered while writing about Martin Luther King Day.

If you have the chance, go check it out before June 13th, when the Meiere exhibit ends.

The Ignatian Spirit and the Mosaics of Hildreth Meiere