There is a quote that has circulated with great vigor on the internet ether, “Sometimes your only available mode of transportation is a leap of faith.”  It is attributed to Margaret Shepard, and as I searched to find more about the author, nothing came up except more permutations of the quote and then finally, someone mentioned this Margaret is a calligrapher. Then I found Margaret Shepherd, and I suspect the quote is an example for calligraphy in one of her books.

I had been eager to move from printing to cursive in the 2nd grade.  I loved making the joins, and studying the letter forms.  When I was a junior high student, I bought a book about learning calligraphy(which may have even been written by Margaret Shepherd), and some of those chisel tipped pens that purport to be the key to beautiful writing.  I carried the book and pen around for many moves, but calligraphy happened in mostly my imagination.  For someone who lived for reading, an art that incorporated words was thrilling, but again, I was first and foremost a reader, not a calligrapher.

Margaret Shepherd helped create the Boston Calligraphy Trail, which I hadn’t known about, and which sounds wonderful.  There are 26 beautiful letters to discover in the Boston Public Library and surrounding neighborhoods by following the trail guide.  On her blog she writes of returning from Finland with photos of Art Nouveau lettering and numbers.  I love that she was photographing typography in the wild.

As someone who spends a lot of time surrounding letters and numbers with glass mosaic, I do now practice a craft that incorporates reading.  Many leaps of faith led me to this work.

Margaret Armstrong(1867-1944), designed over 270 book covers during her career.  I am drawn to her swirling designs, detailed flowers, and love of gold and silver imprinting, and deep rich binding colors.  She and a group of female friends traveled around the western states from 1911-1914, and took a trip to the bottom of the Grand Canyon(the first white women to do so), and went on to write and illustrate Field Book to Western Wildflowers. (Printed Flower Gardens)

I was interested to discover, since Stratoz makes stained glass,  that Armstrong’s father was a well-known stained glass artist who worked with Tiffany, Maitland Armstrong, along with Margaret’s sister Helen Armstrong, using a technique of “plating” where glass is stacked in order to modulate the light.  I also covet her monogram, since it is the same letters of my own, and I love the interlocking type.

According to her brother Hamilton Fish Armstrong, in his book Those Days:

“She started a vogue for making the book covers themselves artistic and distinctive, and her covers became a sort of identity tag for the author. Whenever I see the dark blue and gold design on the spine of some book on a library shelf I have recognized it as Henry van Dyke’s even before Margaret’s distinctive lettering tells me so.”

I checked a book out of the library about Alphonse Mucha(1860-1939), by Sarah Mucha, and realized that the Whitman Chocolates Tin I’ve been using as a cash box was a reproduction of one from 1923, based on a Mucha poster.   When I saw this tin in a gift shop a few years ago, glimmering with a mosaic pattern, I had to buy it since I’m a mosaic artist, and of course I had to eat all the chocolates. The has other posters by Mucha, and I am intrigued by his use of mosaic backgrounds.

A facsimile of a mosaic, done as a print, and adding another delight for the eyes amongst his detailed botanicals, and he also sketched fanciful jewelry in his posters, which ultimately became incarnated as actual jewels, when George Fouquet was inspired by Mucha’s work.  Fouquet also commissioned Mucha to design his jewelry shop in Paris in 1901.  When Fouquet renovated, he was so attached to Mucha’s work that he had the shop dismantled and kept in storage, until the Carnavalet Museum reconstructed it and put it on display.  What a treasure to discover in storage!

Mucha was from Czechoslovakia, but spent many years in Paris and US, working as an artist.  He returned home to paint a series of huge paintings about the Czech people, his Slav Epic. I felt a connection with him when I saw that one of the paintings is of Jan Hus, who protested the selling of indulgences by the Catholic church, and was burned at the stake in the 15th Century.  Hus’s followers went on to become the Moravian Church, and the denomination I grew up in.  What I didn’t know was that Hus’s martyrdom triggered a Czech Rebellion, and the Hussite Wars, and is intertwined with the political history of the Moravian people as well as the Moravian church.

Another surprise to me in this book, was Mucha’s death in 1939, after the Nazi’s invaded Czechoslovakia, and he was arrested by the Gestapo and interrogated.  He died shortly after his release.  The Mucha Museum has a quote by the artist, which I resonate with, describing his work as a bridge between people.  His Slav Epic was about bringing forth the stories of his people, and ultimately about hope.

The purpose of my work was never to destroy but always to create, to construct bridges, because we must live in the hope that humankind will draw together and that the better we understand each other the easier this will become. 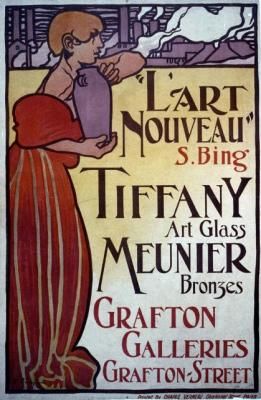 Bing popped into my head for the letter B.  Not Bing Crosby.  Not bing the search engine.  Not bada bing.  Siegfried Bing, who later called himself Samuel Bing, art collector, with a vision of style with sinuous curves, swirls and champion of “L’Art Nouveau” which delighted in decoration.

He was a fan of Louis Tiffany, so that makes him even more cool.  His description of Tiffany’s art glass, which was truly a work of art, is fabulous:

Here what he wanted is the discreet calm of semi-opaque tones in which, embedded within the glass itself, he simulated fine veins, filaments, and trails of color similar to the delicate nuances in the skin of fruit, the petal of a flower, the veins of an autumn leaf….Thus he created certain types of opaque and matt vases, whose excellence—the result of long effort—lay in their incomparable smoothness of surface, giving the sensation of a silky, delicate skin.

Bing had a vision, and although he wasn’t an artist in the strictest sense of the word, his ability to create a collection in his gallery of artists that expressed his vision is breathtaking.

Here’s a photo by Stratoz of a dragonfly glass vase by Emile Galle–an Art Nouveau Artist. 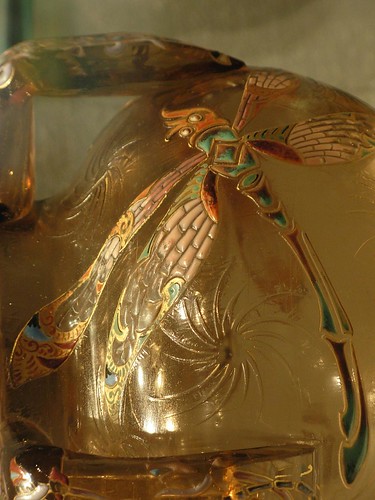 B is for Blue Green