On Tuesdays I feature something orange, and for the A to Z Challenge, I also needed the letter B.  I found this Northampton County Area Community College(NCACC) logo in my old papers from 1986.  NCACC is located in Bethlehem, and it’s where I went my first two years of college.  From far north in Canada, I had applied to Oberlin, Brown, and Vassar, because they were part of the  guidance office’s small collection of college catalogs, but I had no idea of the competition.  I was on two waiting lists, which disappointed me then, but now seems miraculous.

I also applied to several Canadian universities and was planning on attending University of Toronto, but imagining moving all the way across Canada from Alberta to a city I’d never seen was overwhelming.  I decided to spend the summer with my mother and sister in Bethlehem.  A friend from church suggested I look at going to community college until I figured out what I wanted to do.   I loved NCACC, and it’s where I met Stratoz.  B is for Bethlehem, the Christmas City, with a star on the hill made of lights.

Where have you gone “in the meantime”?

For more orange goodness, check out my Orange Tuesdays Pinterest Board. 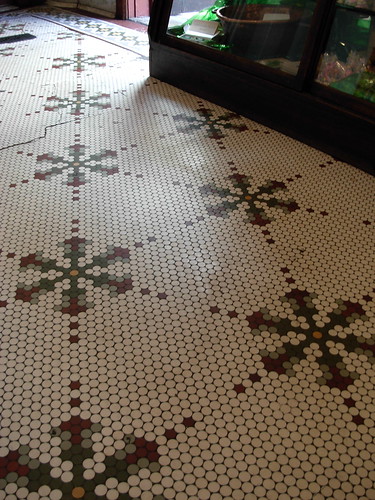 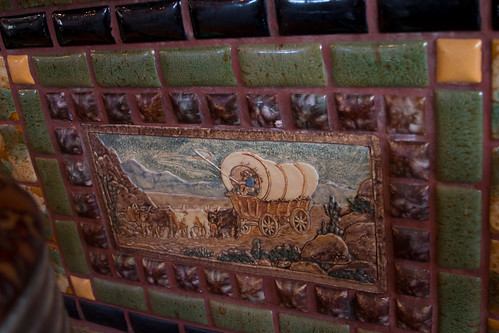 A Z word that Moravians know is Count Nicholas Zinzendorf, from the 18th Century, who took in Czech Moravian refugees, followers of Jan Hus, a protestant martyr who predated Luther, and let them live on his Herrnhut estate in Germany.  Though Lutheran, he became enamoured of the “heart religion” of the Moravians, and eventually founded the town of Bethlehem, PA in 1742.  His daughter Benigna organized the beginnings of Moravian College, where I lived for two years, while my mother attended Moravian Seminary.

My mother went on a tour of Czech sites of Moravian history, and took a photo of this wonderful mosaic at St. Vitus Cathedral in Prague.  The Moravian church’s symbol is of a Lamb, very much like this one.

H is H.D., as the poet Hilda Doolittle(1886-1961) chose to be called.  When I discovered her poems, with their striking imagery, I also felt a kinship with her because of her Moravian heritage, born in Bethlehem, PA.  I grew up in the Moravian church, and as I began writing poetry in my teens and twenties, it seemed quite fortuitous to find H.D.  She was often described by critics as “imagist” and although she didn’t like that label, her poems do have a vivid sense of imagery.  Here is one of my favorites:
“Heat” by H. D.

Fruit cannot drop
through this thick air–
fruit cannot fall into heat
that presses up and blunts
the points of pears
and rounds the grapes.

Cut the heat–
plough through it,
turning it on either side
of your path.

A Star Come to Earth:  The Moravian Star at Christmas<

I met Stratoz in the Fall of 1986, at Northampton County Community College, while we were both working at the Tutoring Center.  He had transferred from NCC to East Stroudsburg, and once he graduated came back to tutor while figuring out what to do with his biology degree and his life.  I was a student, tutoring Introduction to Philosophy.  He heard me talking about Greek philosophers, and this gave him a way to introduce himself.  He came up to me in the Library, and said there was a book he thought I should read–Zen and the Art of Motorcycle Maintenance–which has many references to Greek philosophers.  I went on to become a librarian, so giving me a book to read was a sure way to catch my attention!

I read the book, still not catching on that he was interested in me.  We started having long conversations in the cafeteria.  In April of 1987, we attended a classical piano concert in NCC’s auditorium, and later that evening as he was driving me home, Stratoz confessed he was in love with me, and I was happy to be able to tell him I felt the same way.

A couple of years ago, we both reread Zen and the Art, and we decided it was quite amazing I was willing to give him a chance, since it was a mixture of intense existential angst and complicated excursions into Philosophy which led to insanity on the part of the narrator.  But at the time, I was just glad to have found someone to talk to, who liked books, and who listened to what I had to say with intentness.

So we are pleased to be doing the NCC Alumni Association Spring Craft Show on March 12th, 2011, in Bethlehem, PA, and going back to where it all started!

**Note:  When we went there, it was Northampton County Area Community College, abbreviated NCACC and pronounced Nack-Ack.  The new name of N-C-C is quite sophisticated, but doesn’t have quite the same ring to our ears.

The summer of 2010, I reached a milestone 25 years of  living in the United States.  I left Edmonton, AB, Canada, in July of 1985, to go live with my mother and sister in Bethlehem, PA, the Moravian Mecca, where my mother was attending Moravian Seminary to become a minister.  I was 17, almost 18, and couldn’t imagine ever becoming comfortable in my new home.  Seriously, I didn’t understand flag worship, and my husband tried to explain it to me when I met him at 19.  I felt like an alien.  Now, after moving to several states, including Massachusetts, Oregon and Illinois, I have lived in PA for longer than anywhere else in the US, and it is my home.

I’d never heard of a rowhouse when I moved to the Philadelphia area, and now I live in one!  As my husband says, it’s our 1 bedroom-2 studio house.  There are still ways that I feel like an outsider, but this is where I have friends, where I know the back roads, where I make art, and now I can’t imagine going back to Canada.  But growing up there did shape me, and I am grateful for the perspective it gives me.  I always was a kind of alien, being born in the US, and moving to Canada when I was just a baby, and becoming a resident alien, a “permanent resident” which becomes impermanent if you leave for more than 2 years, and dont do arduous paperwork.

This photo is from the week before I moved to the US.  The back of the photo is labeled, in my stepmother’s handwriting, “Hercules and Margaret Almon, June 28th, 1985.”  Obviously, the most important person is listed first!  Hercules was a big lug of a cat who wandered around my father and stepmother’s condo complex, in search of superior victuals, and found the smoked salmon at their place suited him fine.  My haphazard buzz cut was from a woman at a $6 haircut shop, who watched tv while loosely interpreting Annie Lennox, left some bare patches, but overall, 6 weeks in, things were evening out.  Finally, I am wearing a Brave New Waves t-shirt that I received after writing many letters mentioning local bands to this late-night indie music radio show from the CBC.  I am taken aback by how currently “retro” it looks, with the old-school headphones emblazoned on the front.

How do you know when you are home?  I’d love to hear your stories.