My love of orange appeared when I started making art in my 30’s.  My sister loved orange as a child, but I was unmoved, baffled.  I discovered that orange was a contentious subject for some color theorists at the beginning of the 20th Century.  Albert Munsell worked on developing a color notation system, like a Dewey Decimal for color, without names, which he found undecipherable, and his notation is still used in the 21st Century.

Orange is known as Yellow-Red.  Munsell was an artist, and he envisioned colors as mixtures of pigments, and orange was yellow plus red pigment.  He wanted to teach children about color starting with the primary hues and only then moving to intermediate ones like orange.  Henry Bailey, a teacher of art, was incensed at the notion that children weren’t ready to learn about orange.  He saw orange as a basic color, along with green and violet, in addition to the primaries of red, yellow and blue.  Both Munsell and Bailey took color education very seriously, in an odd forward echo of sex education in my own era.

Reading the text of Bailey’s lecture on color, I was surprised by the sudden turn into theology.

In conclusion Mr Bailey said that the end of all education is character God’s aim in this world is the perfection of human souls and he has flooded it with color. Let us try to lead the children to see the color that there is in the world and to love it.  And when we are weary of this world we love to read of the next and in the Book of Revelations we are told that the gates of the heavenly city have the colors of the most beautiful and most precious stones and may it not prove that in teaching our pupils to appreciate the beauties of this earthly habitation we are preparing them to share the glories of that eternal abode that house not made with hands

I have a spiritual connection with color, though not in a Book of Revelations way.  In spite of my discomfort with color theory being equated with preparation for the gates of heaven, there is something wonderful about Bailey’s line, “Let us try to lead the children to see the color that there is in the world and to love it.”

More Yellow-Red Goodness on my Orange Tuesdays Pinterest Board

The Color Orange Sets of a Testy Debate

Psychology of the Color Orange

Ann Brauer makes quilts from color, from landscape, from beauty.  I love how she lets the colors play off of each other, whether in intense jewel tones, rainbow progressions, or in letting flashes of brightness be wrapped in greys and browns.  On twitter she made a comment that resonated with me about people not realizing they were looking for a quilt until they saw hers.  We get ideas about what “quilts” are or what “mosaics” are.  There is immense wonder in being wowed by an artwork, in responding before we even know what we are looking at.

The piece above, Ancient Light, is captivating with the windows of orange against the muted background.  She wrote a blog post, Why Grey?

Why did I want to work in these colors again? What was it about them? Why was I drawn to these soft colors of slate and mist, mauve and taupe? Was it the trees in the winter? Their bark against the fallen leaves? Or the sky just before a snow storm? Those deep rich colors? Or just wanting to contrast these dark colors against clouds of light and promise?

More Orange Goodness on my Orange Tuesdays Pinterest Board 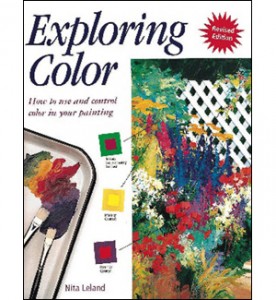 Alas, Nita Leland’s Exploring Color: How to Use and Control Color in Your Painting is out of print, but used copies are still around.  I found a copy at the public library in 2004, and was entranced with Nita Leland’s assertion that color can be learned.  As I explored collage and other visual mediums, I noticed how strongly I responded to color, and I wanted to understand this language of hue and tone and contrast.  I took a watercolor class, and all I wanted to do was mix colors, which didn’t translate into actually painting much.

It was exciting having a name for why two colors practically vibrate next to each other(ie. orange and blue, complementary colors), and learning how colors transition into each other around a color wheel.  I found my notebook of color experiments, and it brought back the thrill of trying these combinations out for myself.  I played with a “tetrad” of red-orange/yellow-green/blue-violet/blue-green.I wrote a page of anxious notes about whether the colors were what I thought they were, but that’s part of what happens with colors. They shift and shimmer depending on context.  Fortunately, I wrote at the end the page that I really liked the red of the ship against the blue, and the yellow-green against the red-orange.  Color sense cannot be completely articulated in words, and along with learning the language color, I’ve also learned about the unspoken nature of color.

Discovering ways to work with color was pivotal in making my art.  The first time I saw a color wheel I fell in love.  Then in 2004, I read Nita Leland’s book Exploring Color which was like an infusion of pure energy.  I was reminded of my color wheel love when I made the Rainbow Panel for the exhibit at Virago Baking Company, with all the delicious transitions between colors, and then Stratoz mentioned he was teaching about Maurice-Eugene Chevreul in his science class.  Chevreul was a chemist hired by the Gobelin Dyeworks of Paris to brighten up their colors.   What’s fascinating is his conclusion that the dyes themselves weren’t the problem, but how close together the different colors were woven together by textile companies.

Color is a chameleon.  One color can look different depending on what other color surrounds it.  It’s like a magic trick, transforming one thing into another.  Colors that are opposite from each other on the color wheel are called complementary–red/green, orange/blue and yellow/violet–are particularly intense when side by side, as if they were almost vibrating.  For even more fun, there are triads and tetrads.  Stratoz was inspired to create his Tetradic Heart after teaching about Chevreul.

My log cabin quilt collage cards from my previous post were an initial experiment with red and green and searching through magazines for color was a revelation.  Every page became a palette.

Log Cabin is still one of my favorite designs to work with.  Many of my mosaic trivets are variations on the Log Cabin quilt block, and wonderfully suited to playing with contrasting colors, as quilters have known for eons.

What color combinations do you enjoy?  If you make things, are there certain colors you gravitate to in your work?  I’d love to hear about more color love.