In the Fabric’s Path was one of my favorites at the 2014 Pennsylvania Quilt Extravaganza.  Orna Shahar belongs to the Israel Quilters Association, and also to Encounters Art Quilt Group, with 16 Israeli quilters who meet to learn from each other, and learn from other art forms such as origami, ceramic, metal, papercutting, and glass. Quilting has been an inspiration to me as a mosaic artist, so it is cool to find quilt artists who explore other art forms.

My mind is percolating on how to make a spiral with bundles of vertical lines.  The Red Tail Rainbow Mandala I made in 2011 has a black background.  I just had to look up what the name of the shapes I used ~ apparently I am partial to scalene and right-angled triangles and quadrilateral polygons of the kite and trapezoid shapes.  In the process I found Paul Calter’s Squaring the Circle: Geometry in Art & Architecture, the chapter on Polygons, Tilings and Sacred Geometry.

Looking at the etymology of geometry, it originates from “measurement of earth, ” or Old English “earth-craft.”  I imagine the idea of surveying the land in the service of beauty.

I have a compelling desire to create rainbows.  I have made many of them in mosaic.  Once a woman came into my craft show booth and was smitten with one of my rainbow panels, but said she couldn’t buy it because her husband would be affronted by the gay implications, and gave an awkward shrug.  This made me both sad and angry.

With the Supreme Court ruling about marriage and gay folk in June, 2015, there is an abundance of rainbows appearing on my Facebook stream, and it’s outburst of talking my rainbow language, and to me this ruling good news, just as God’s love is good news.

My love of rainbows began at Moravian Church Camp Van Es at Cooking Lake in Alberta.  The theme in 1982 was The Rainbow Connection.  We each had a  slice a log, and a volunteer had applied rainbows and written our names.  We watched The Muppet Movie with the theme song The Rainbow Connection, and learned the to sing it.  We painted a large rainbow backdrop, in an open area in the woods.

We memorized Bible verses about the rainbow as a symbol of God’s promise to never again cover the earth in a great flood, a sign of God’s love.  What gave it power was the idea that this love extended to me, though I felt flawed through my core, cracked with no method of repair.  True grace is a very difficult thing to accept, because the bruised soul assumes it applies to everyone else except her.

I took the idea of hope and love to heart.  I bought a pewter pendant cast in the form of a rainbow and embedded with an Ichthys fish(a visual pun, an acronym of the Greek letters spelling out Jesus Son of God, which also meant fish).  I wore it often, as a way to remain hopeful.

Now, some 30 years later, I look at it and wonder at the grayness of this rainbow, and no wonder I feel compelled to create them in full color.  For a girl of 14, coming out of a year of depression, the colors were intense.  There is power in symbols, but also the power of color itself, the incarnation of beauty.

I just love color and when I say I love color it’s not about that I just love bright colors. I just love color. I’ve had a really fun time in the last year, two years, working with beige and just exploring and playing around with the properties in the colors of beige, the different beiges, so I just like colors and so I tend to work with a lot of colors.

Stratoz and I satiated our quilt sense at the Pennsylvania National Quilt Extravaganza 2014.  This special exhibit, out of the Crayon Box, by Rachel Clark was like a dream closet, a space of color clothing the body and soul.  That last phrase is her tagline and it is wonderful. The opening quote is from an interview with Rachel Clark, and she articulated something that I have experienced – a love of color, not just bright colors.  I love playing with colors in all their forms. 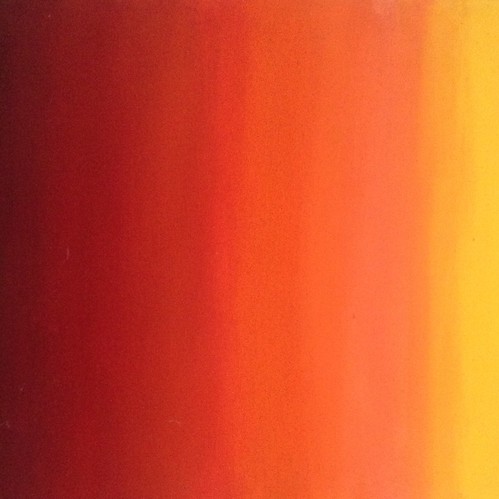 Our friends have this painting by Lauralee Klindt in their sunroom.  It is a good 3 feet long, which has me imagining a really big mosaic spectrum! I particularly like the orange section, where both red and yellow speak to the orange. 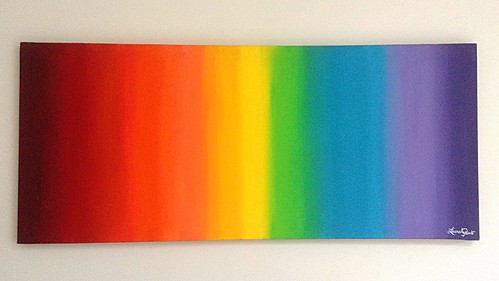 Tokujin Yoshioka constructed a church of color and light 40 feet tall with 500 crystal prisms as the Museum of Contemporary Art Tokyo.  According to his press release, he was inspired by a chapel designed by Matisse:

It was inspired when the young Yoshioka visited the Chappelle du Rosaire,
a chapel designed by Henri Matisse in his last years, and was struck by the beauty of its light.
The sunlight of the Provence pouring in through the beautiful stained glass,
created in the vivid colors so characteristic of Matisse’s paintings, created a space suffused with Matisse’s colors. There Yoshioka was seized by an ambition to construct a space of his own in which to experience light through all the senses. This large-scale installation presents that light, which has always been one of his ultimate goals.

To envelope you in colored light is one of the magical powers of stained glass, and Tokujin Yoshioka finds his own way to release color.

This is color play at its most exquisite.  Kathy K. Wylie created this quilt for a competition with the theme of color.  She wanted to create a color wheel using hexagons, but finding enough fabric to do all the gradations of hue was a challenge.  I love her solution of printing the hexagons onto fabric sheets, using the power of the computer to mix colors.  Wylie started with cyan, magenta, and yellow, the classic three colors of digital printing, and named the quilt Trinity in their honor.