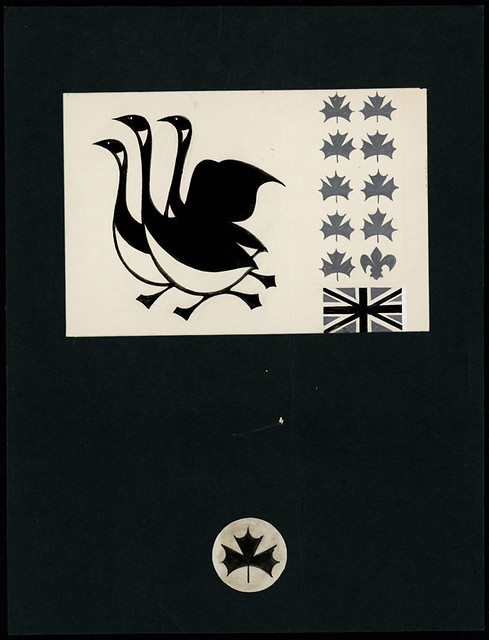 C is for Canada, my home and not so native land, since I was born in Albuquerque,
and my parents moved to Canada when I was a baby.
Canada didn’t get a flag of its own until 1965 when Prime Minister Lester Pearson
made it a priority, and a competition was held.

In Junior High I had a unit in Social Studies about the history of Canada called
Evolution, Not Revolution, and this is illustrated in an account of Joan O’Malley,
who sewed the first prototype as at the request of her father
who worked for the Canadian government:

I really didn’t realize what I was getting into when I got that phone call from my father in 1964. I was just doing my father a favour; not participating in history.
Let me tell you, I don’t think of myself as the Betsy Ross type. [bold added]

And sewing the flag was not easy. I was no professional –
I had just sewed some of my clothes before this.
My sewing machine wasn’t made for such heavy material. But eventually, the flag came together.

At the time, it wasn’t the best way I could think of to spend a Friday night.
In fact, my father was more excited than I was about the whole thing –
he was the one who got to deliver the prototypes to Mr. Pearson’s house.

Even though I may not have realized the importance of what I had been asked to do then,
I felt good about sewing the prototypes for the flag. It was certainly not a request people got every day.

The Library and Archives of Canada has an awesome set of photos on Flickr with some of the entries.

The maple leaf was a popular design element, but some went with abstraction,
like these two blue dots on a field of red and white.

The Northern Lights would have made an elegant flag.

The Canada goose one amuses me the most though.