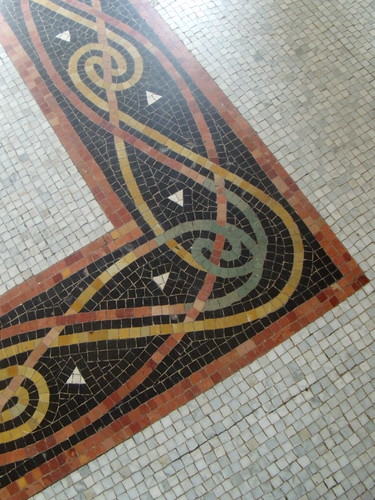 I came across this delightful swirly mosaic floor at the Children’s Room of the Smithsonian castle on vacation this summer in Washington DC.  Originally commissioned by the Secretary of the Smithsonian in 1899, Samuel P. Langley, the Children’s Room was an expression of his belief that children should learn by personal observation and experiential activity rather than by memorization.  He had “Knowledge Begins in Wonder” stenciled over the transom of the South Entrance.  The room had display cases low to the ground, colorful fish, stones, plants, a kaleidescope and hanging birdcages.  This philosophy of experiential learning reminds me of the Waldorf Schools, and our favorite show at Kimberton Waldorf School, with all the lovely handiwork by the students.

I was intrigued that the decorative painting on the walls and ceiling were done by Grace Lincoln Temple, one of the first women to decorate public buildings in the US. Among other things, she decorated the ballroom for Theodore Roosevelt’s inauguration. 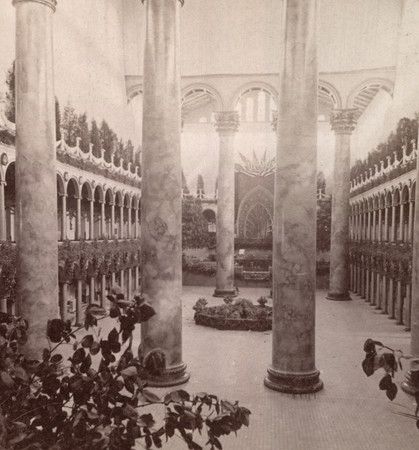 For the Smithsonian, she created an environment of fanciful birds, among grapevines and leaves. (For a cool picture of her on scaffolding, check this out.) Over the years the room was turned into an office, and layers of paint covered Temple’s work.  In a neat bit of fortune in 1987, a chunk of paint was dislodged by a water leak from above and the decoration revealed.  The Paintings Conservator, Roland Cunningham, tested other spots and found more intact stencils, and all the layers of dull utilitarian paint were removed and the room restored.

Sometimes it seems like there is a whole legion of creative women who are part of the fabric of our visual world, but yet are invisible.  I scrounged for information about Grace Lincoln Temple, and found passing references in newspapers and reports, like this quote, “She had charge of the decorations in the Woman’s Building at the Atlanta Exposition in 1895, and her work then made an impression that was national and everywhere favorable.”

It’s alien imagining a world where women decorating the interiors of buildings in on a grand and public scale was ground that had to be broken by pioneering artists like Grace Lincoln Temple.