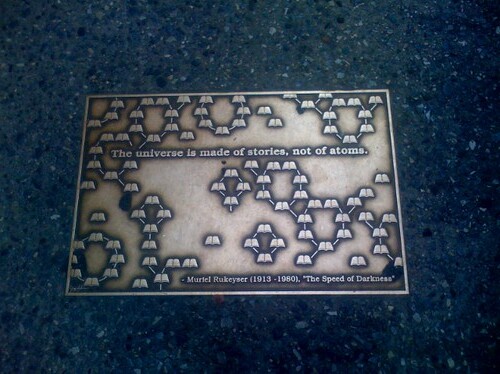 In college, I took a class on the history of the American Labor movement in the first part of the 20th Century, and learned of tragedies like the Triangle Shirtwaist Factory fire, where women workers died because the fire doors were chained shut by the company to prevent theft.  Being a poet, I came upon the idea of writing a paper about poetry of the labor movement, and this introduced me one of my favorite poets, Muriel Rukeyser.  She wrote a powerful poem series, The Book of the Dead(1938), about the Hawks Nest Tunnel disaster in West Virginia, where Union Carbide had mostly African American workers tunnel through pure silica without any masks, and many died from silicosis of the lungs. She writes about a black man in George Robinson: Blues, who testified at the hearings about the tunnel:

As dark as I am, when I came out at morning after the tunnel at night,
with a white man, nobody could have told which man was white.
The dust had covered us both, and the dust was white.

In Absalom, she writes of a mother looking for the cause of her sons’ deaths:

The oldest son was twenty-three.
The next son was twenty-one.
The youngest son was eighteen.
They called it pneumonia at first.
They would pronounce it fever.
Shirley asked that we try to find out.
That’s how they learned what the trouble was.
I open out a way, they have covered my sky with crystal
I come forth by day, I am born a second time,
I force a way through, and I know the gate
I shall journey over the earth among the living.
He shall not be diminished, never;
I shall give a mouth to my son.

“Poem” from 1968, describes living in the first century of World Wars, of news pouring out of various
devices, of the despair, but also hope, and sounds very much like it could be from today:

By Muriel Rukeyser 1913–1980
I lived in the first century of world wars.
Most mornings I would be more or less insane,
The newspapers would arrive with their careless stories,
The news would pour out of various devices
Interrupted by attempts to sell products to the unseen.
I would call my friends on other devices;
They would be more or less mad for similar reasons.
Slowly I would get to pen and paper,
Make my poems for others unseen and unborn.
In the day I would be reminded of those men and women,
Brave, setting up signals across vast distances,
Considering a nameless way of living, of almost unimagined values.
As the lights darkened, as the lights of night brightened,
We would try to imagine them, try to find each other,
To construct peace, to make love, to reconcile
Waking with sleeping, ourselves with each other,
Ourselves with ourselves. We would try by any means
To reach the limits of ourselves, to reach beyond ourselves,
To let go the means, to wake.
I lived in the first century of these wars.