Margaret Olley(1923-2011) is another artist  I discovered because I was searching for Margarets.  In Australia, she is well known. I had not heard of her, and it reminds me of when I left Canada, and all the artists, writers and musicians who were invisible in the United States.

As one article title summed her up, Margaret Olley, last of the Bohemians, she lived in an old hat factory, with colorful walls, and a sculptural array of objects on every surface.  Her house was her “lifelong installation,” and a source of creativity and subjects for her jewel toned still life paintings.  In fact, she donated 1 million dollars to create The Margaret Olley Art Centre, where her rooms are recreated piece by piece.  Margaret Olley’s life was a mixture of being an art student, designing theatrical costumes, and an unerring sense of what Sydney properties she could buy and transform(but no beige paint) and sell at a profit.  She was frugal, didn’t own a car, didn’t marry or have children, and donated 130 artworks to the Art Gallery of NSW including Degas, Picasso and Cezanne. 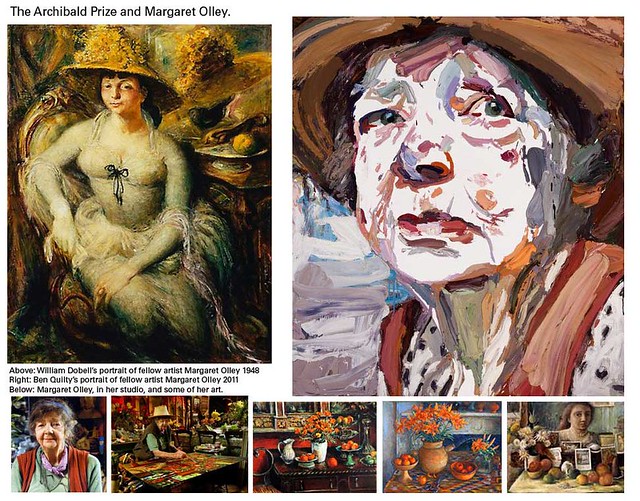 Her story made me think of Albert Barnes, well known in the Philadelphia area for his Impressionist and Modernist art collection, arranged in a specific order in a mansion he had built to house the work, and from which he never wanted it parted. After his death, through much legal wrangling, the collection was moved to a brand new building  the Ben Franklin Parkway, although still arranged in Barnes order.

Olley remained herself through and through, independent and eccentric.  Still life and interiors were often dismissed by art critics, but Olley persisted in what she wanted to paint. She had no children and evades the United States narrative of “feisty grandmother.” She mentored many Australian artists, and left a legacy of philanthropy.